skip to main | skip to sidebar

Hello All!
I won't be updating this blog anymore, but you can feel free to follow me here!
Follow me on my edible adventures around Italy and the rest of the world!

Alison
Pubblicato da Round the World in 80 Bites a 13:03 Nessun commento:

If I'm Not Feeling So Well Tomorrow....

Here's the culprit! As you all probably know already, I love to try out dishes particular to an area, or even to a specific day. Today is giovedi santo, or Holy Thursday, and today the thing to eat here in Naples is zuppa di cozze. I happened to find a restaurant very close to my house serving this mussel "soup" street side, take-away style. So, 9 euros later, I have dinner all ready! (Or so I thought...) 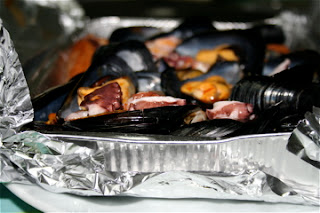 While waiting for my order to be prepared I was transfixed by the amazing process of preparing the soup. Rather large aluminum trays filled with mussels, octopus, bread and what I thought were olives. These were then drenched a few times with hot water, which was then completely drained from the tray. From there, a lady bathed the whole affair in a clear, bright red sauce. Wrapped in aluminum foil, it seemed like a quick, easy and delicious dinner. 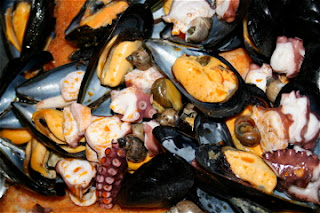 Not so much. While I can't complain about the octopus, the mussels were pretty gritty and some even contained little pieces of shells. I was expecting the red sauce to be super spicy and tasty, but I didn't pick up on either taste or spice. The worst part, however, were the "olives." Oh, once I peeled back the aluminum foil, I noticed they were not olives. They were snails. And slimy ones to boot.
I'm not sure if the zuppa di cozze is like this everywhere, or if I just picked the wrong spot. I'll try it again somewhere else, but this may be one seafood dish I'd rather pass up...
Pubblicato da Round the World in 80 Bites a 12:09 1 commento:

If you've been following my blog, you've certainly seen all of the posts about Eataly and the restaurants. The New York location is just great, but I also wanted to see what the original Eataly store in Torino is like. So, while I was in the north, I left the beautiful center of Turin for the outskirts. Lingotto, a neighborhood of Torino, is home to the original Eataly supermarket. 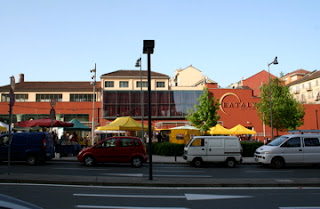 I won't say that I was disappointed, but the Turin location is small! (I believe about half the size of its NYC
counterpart.) The goods sold are almost exactly the same as those in NY, and the prices are more or less the same. Even the restaurants are the same, though this time I didn't have enough time to try one out. I wouldn't make another trip out there unless I needed something specific or was going to the Museo dell'Automobile nearby, but I certainly enjoyed seeing the original!
Pubblicato da Round the World in 80 Bites a 05:24 Nessun commento: 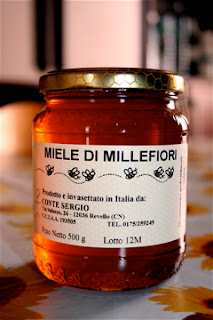 Loving all things local, I had to pick up this honey while I was back in Revello. One of many different varieties sold at the very tiny supermarket in town, I used it in iced tea and slathered it on some gorgonzola cheese too! Yum!
Pubblicato da Round the World in 80 Bites a 05:00 1 commento:

While back up in Revello recently, I happened to find delicious, sweet local asparagus in the town's vegetable shop. 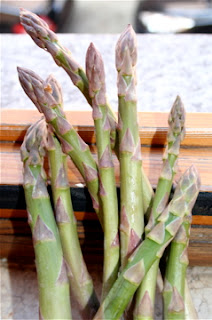 So, I was a big-time copy cat and made a great asparagus risotto! This looks pretty familiar, doesn't it? :) 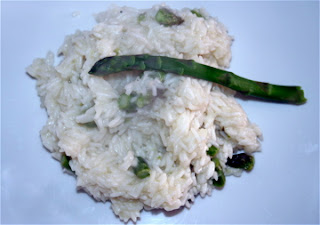 Pubblicato da Round the World in 80 Bites a 08:00 Nessun commento:

Italian food is generally not about manipulation or modernity, though the East Village restaurant Perbacco certainly tries to incorporate both of these elements into their food. To be clear, the food was not bad by any stretch of the imagination. However, I do feel that one must know the best way possible to treat and serve certain foods to make a dish effective. Here, perhaps, is where Perbacco may need some work.
Our dinner started off on a very positive note. The ambiance is to-die-for; the small dining room artfully packs as many tables as humanly possible into the cozy space. It reminded me of someplace I could have found in my old neighborhood in Rome, like a little part of Trastevere had been transplanted in New York.
From the appetizers we had ordered, it seemed as if a very promising dinner was in store. Golden brown arancini were served in a paper cone and flanked by a tomato sauce. Their abundant portion of creme brulee di Parmigiano Reggiano was heaven for a cheese-lover like myself. The steak tartare, though, served with a lightly poached egg yolk, was overshadowed by the heavy flavor of the mushrooms. The eggplant and tomato fritters served with a mozzarella foam were not what we were expecting, but nevertheless proved to be my table's favorite appetizer hands down.
The primi, for the most part, were nicely done as well. The tagliatelle with lamb ragu were simple and well executed, as was the risotto ai frutti di mare. A few mussels and clams in their shells for garnish wouldn't have hurt, but it was nevertheless a good dish of risotto. My pasta dish, however, did not go down in my book of favorites. I had ordered the ravioli di zucca con salsiccia e amaretti, pumpkin ravioli with sausage ragu/sauce and amaretto. The ravioli were lined down the middle of the plate, flanked by drops of amaretto foam and a line of the sausage sauce. Perhaps, aesthetically, not the best choice in the world.
Secondi and the desserts really didn't leave us with anything spectacular, either. The braised beef cheeks were thoroughly enjoyed, the best of the entrees. The salmon was perfectly cooked, however the plate looked quite sad. A huge chunk of salmon, a few pieces of grilled endive and two sauteed mushrooms was certainly minimalist, though not a super presentation. The least enjoyed dish was the chicken rolled with cheese and raisins, served over mashed potatoes and spinach. Could have been us, but there was just something that didn't work in the recipe, plus the potatoes were cold! 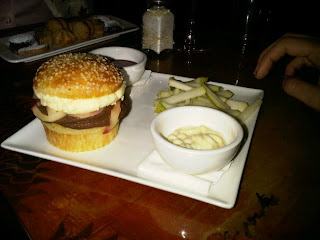 My dessert was quite the attention-grabber. The hamburger di cioccolato was visually hilarious, but taste-wise fell flat. The "bun" was made of a sweet dough that was just too dry to eat and enjoy. The two chocolate mousses that formed the patties were good, but didn't make up for the dry bun. Is it sad to say that my favorite part were actually the pear "fries" and the raspberry and white chocolate/ginger dipping sauces? A cute way to end the meal, but it would have been much cuter if it were pleasing both visually and taste-wise.
Overall, our dinner at Perbacco was good, but nothing spectacular. Prices seemed fair and the service was decent. ( I don't want my server apologizing for a messed-up presentation when the plate hits the table, nor do I want her to be slapping friends/customers high-fives as they walk in. Sorry.) The manager certainly should have done the rounds, but stayed put on his stool for most of the time we were there. Perbacco didn't leave me with a terrible taste in my mouth; I would actually go back quite willingly to see how they perform given a second try.
Pubblicato da Round the World in 80 Bites a 02:49 Nessun commento: 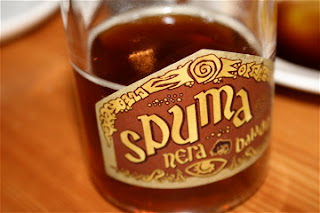 The best thing about Eataly is most likely the fact that you don't have to wait until you get home to try out the goods. The store's motto is "We sell what we cook and we cook what we sell," so the very same products offered for sale are what are used in the restaurants too. I was really expecting some darn good food from the sit-down restaurants at Eataly; one of the main reasons being my profound respect for Mario Batali, Lidia Matticchio Bastianich, and what they cook. During my trip to the store, we decided to lunch at 'Il Pesce,' the restaurant devoted to serving only fish and shellfish. 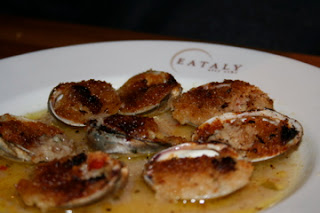 Reeling from an overly-complex Italian meal the night before, the simplicity of the food we ate at 'Il Pesce' was much appreciated in my eyes. The meal began with Eataly's dense, tasty bread served with that classic Italian-American mixture of olive oil and balsamic vinegar. (The bread could have gone to better use if we avoided this faux-scarpetta and went directly for what was left from the appetizers or mains.)
Though a nice glass of white would have been the perfect match for the following meal, I (and my antibiotics) opted for the herby, subtly sweet Spuma Nera soda.

Being a huge fan of raw fish and meat, I opted for the crudo trio to begin. The day's three fishes were fluke, porgy and hamachi, served with black radish, toasted seeds and an aoili, respectively. Everything was spot-on, though I certainly wouldn't have minded a slightly more abundant portions of each. Another appetizer that we ordered were the baked clams, delicious, though missing out on the nice presentation of my crudo trio.

As for the main dishes, the entire table ordered either the grilled octopus salad or the grilled tuna. As I said before, not many choices but you can't mess with fresh, well-prepared seafood. The tuna, lightly salted only, was served with greens and beans. Though unevenly grilled, at the photo shows, it was still a prime and sizable chunk of fish. The octopus salad, on the other hand, was simply perfect. Also grilled and lightly seasoned, this was served over top of a simple salad with cannelloni beans dressed in olive oil and a touch of balsamic. I was practically imagining myself beach-side in Italy at a little seafood joint. 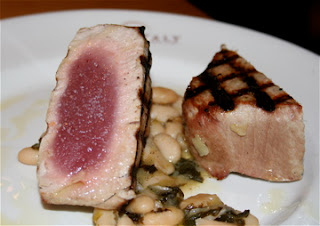 The side dishes, one in particular, cannot be forgotten either. There were bitter greens; I'm not sure exactly what type they were. We also ordered the richest, creamiest, most divine (and calorie-filled?) polenta ever created. No polenta I've ever made has even come minimally close to being like this. While I'd love to know the recipe, I would imagine that there copious amounts of butter, cream and cheese were utilized to get such a smooth, creamy texture. While I'd never pair it with seafood, the intrinsic goodness the polenta made everything all right. Service was rather slow and the ambience was most definitely that of a food court, however the food made up for all of that. All of the dishes were rather costly, most of the dishes costing from 20-25 dollars each. (I'd imagine that's pretty standard NYC restaurant pricing for fresh fish, though.) It was nice to do some shopping, sit down and eat a very decent meal, and then rejoin the crowds without feeling laden down with a heavy lunch. Next time I'm in New York, I will without hesitation give the other Eataly restaurants a try.
Pubblicato da Round the World in 80 Bites a 01:32 1 commento:

Round the World in 80 Bites
France
Come with me on my amazing voyage!